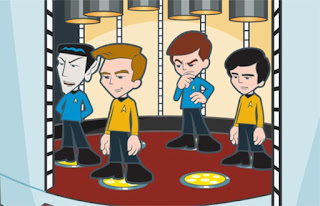 DMAC6806's The Kobayashi Maru, and other Animations 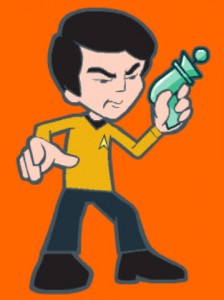 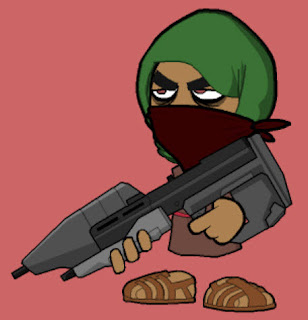 Star Trek: Kobayashi Maru    This is DMAC6806's adaption of the Julia Ecklar novel "The Kobayashi Maru".  (47:27), It is an animation in 9 parts.  The first three tell the story of Kirk, the next three of Scotty, and the last three, the story of Sulu.  I have not read the novel, so I am judging this animation as an independent work.
It is cartoon format, no voices, with sound effects.
Part 1(3:46)  Kirk loses the Kobayashi Maru, and does it pretty quickly.  He is still rehashing it after midnight when he is told to go to bed, that a man can't beat a computer.  Kirk disagrees.  He is told that, in the end all beings, and all species, and the universe itself dies.
Part 2(4:47) Another run through the Kobayashi Maru for Kirk, and another failure.  When Kirk stays behind when told to leave and meet in a conference in half an hour, the instructor tells him that he was faster and better than most by far. Kirk says he should have done more, but the instructor assures him the outcome would be the same.  Kirk is outraged that there is no chance for him to win.  He objects that the instructor told him he could do it as many times as he wanted, but the instructor now explains that that would be a waste of his time.
Part 3(5:53) He runs into the same assistant who sent him to bed, and explains that he doesn't believe in the no win scenario.  The assistant points out that, in any conflict somebody loses.  The assistant suggests that if he thinks the no win scenario is a fiction, the test shouldn't bother him.  Kirk decides the tests cheats, and he will, too.  We see him near the simiulator at 5 am, then going to take the test again a few hours later.  The assistant notices he hasn't slept.  The Klingon commander in the simulation this time is convinced to assist Kirk in the rescue and then get him out of the neutral zone.  The instructor is clear that he knows Kirk reprogrammed it and he'll pay.
Part 4(3:44)    The next segments follow Scotty's experience with the Kobayashi Maru.  Scotty, blushing, faces the instructor, who found him drawing in history class.  Under questioning, he admits he is not interested in being a commander, rather than an engineer.  The instructor offers to have him transferred to Engineering school when he discovers Scotty is there only because of family pressure.  Scotty doesn't want that transfer, he wants to stick things out at command school.  At 3 AM Scotty gets a computer message from an unknown source offering to help him return to engineering school without shaming his parents.  Scotty admits he'd like that.
Part 5(4:20)  Facing the Kobayashi Maru, Scotty takes and engineer's approach to the fight.  He uses the phases to find the frequency to the shields, cutting through them and overcoming the much larger group of Klingon ships.  But, this being theKobayashi Maru, the program creates and entire new fleet of Klingons, so Scotty goes for a canister of antimatter.  Since all torpedoes and phasers are down, he moves the antimatter to the transporter.  He uses impuse to run, while taking readings of the Klingon ships to figure out where to transport the antimatter.  He destorys the fleet, and they are now out of the neutral zone, but the Klingons follow him anyway.  ... nine ships now.   He beams the torpedoes he can't shoot and knocks out the nine ships.  They are replaced by 15 war dragons.   Scotty demands they start to loosen the warp engine itself.
Part 6(4:38)  It turns out Scotty used a disproven theory to defeat the Klingons... a theory he disproved himself.  His way of operating is declared cheating, he is found unsuitable for command school, and moved to Engineering school.
Part 7(5:00) Sulu and his grandfather (who has the head of the actor who played the teacher/gardener in Karate Kid) were out sailing, and when they come back a doctor who was trying to reach the grandfather objects to his being out with the grandson.  He has what sounds like cancer and skipped his radiation treatment to spend the last day his grandson had before entering command school with him... although that school is just across the bay.  He gets his grandfather ready for his treatments, and the grandfather gives him a pep talk about trying to do more than he think he can, and then, even if he fails, getting up and trying again.


Part 8(5:13)  Sulu returns to his room after a week of Command school, exhausted, only find his grandfather asleep in his bed... inside the restricted campus.  Grandfather had just told the guard he was an Admiral.  Sulu sneaks him out.  His grandfather sees a hall guard and says hell, and Sulu tries to cover for him.  When they get outside, Sulu wants to know why his grandfather came.  He is dying, and he has decided against surgery which might kill him or extend his life.  He says 103 is older than people should be, and he's also decided to stop the treatments.  He'd rather have a month or two that's happy than a longer, miserable life.  He'd rather die sooner than die badly.  Sulu objects that his grandfather promised to come to his graduation, and now he'll be dead.  Sulu is angry that his grandfather has given up.
Part 9(10:06) Summary to come.
Posted by Barb at 9:00 PM